Posted on Thursday, September 25, 2008 No comments: Links to this post

Email ThisBlogThis!Share to TwitterShare to FacebookShare to Pinterest
Filed Under: Personal

Although I try to avoid comments on anything related to work, but this has caught my attention. Exchange4Media reports that India Post has unveiled a new campaign to try and resurrect the 154 year old organization. As a part of the campaign, O&M Delhi has come up with a new logo and a tagline - "Giving wings to your dreams", which in my humble opinions looks like a line created with Dilbert Mission Statement Generator

The agency says that the new logo "depicts yellow flourish on a red rectangle, symbolizing an envelope. Yellow represents a rising sun, while red, signifies the dawn of a new era." I mean all that is fine but it lacks the class and panache of the simple, classic and yet powerful logo. Who would remember the "dawn of a new era" few years from now? I did not even realize that the yellow pseudo-swoosh on the red background is supposed to resemble folds of an envelope.

What about all the people that India post touches? Think for a minute about people who live in semi-urban and rural India? For a lot of them, postmen and post-offices act as sources of information, news, money, access to reading and writing, gossip etc. Would these people be able to adapt to the new logo easily? Would that trust on the postal system stay concrete? Wouldnt there be a disconnect in their minds when all of a sudden they see changes in the colors and imagery?

Agreed that the 150 year old institution is reeling under the pressure from Telephony and Internet (emails substituting letters and postcards), private courier companies (for freight carriage and bulky deliveries) and so and so forth. Agreed that India Post is seen as yet another sarkaari company with bureaucracy, painfully slow work environment, lack of enthusiasm and motivation amongst employees but just a new logo and communication is not the way to go about it.

Project Arrow was an initiative in the right direction - to make post offices more than just delivery and access points for mails (there were talks of setting up Internet kiosks, selling insurance, data collection etc.). The idea was to modernize the postal system and revitalize it. They hired McKinsey to work on the turnaround strategy and with the work so far, I am not very impressed. So much for consults being top preference for management graduates.

Ideally along with a management consult, India Post should be hiring a HR consultant to put some sense in their employees to start with. And then the marketing and branding consultants to help out with communication part. Its always an incremental process and has to be like one baby step as a time.

I am very disappointed with the new logo. And since we live in a democracy, I can not really do anything to stop Mr. Scindhia Junior to actually not use it. And with due course of time we will get used to it. We saw the same with Godrej, Shoppers Stop, Canara Bank, Axis Bank, Union Bank of India and their new logos. There is a huge hue and cry when the new logos are revealed. And with passage of time, people get busy with their lives and forget. The institution losses. The identity is lost. The classic era fades away. Only entity to win is the agency that has created the new logo and has charged pretty bucks for it.

Please note, the opinions herein are purely mine and mine only. Please also see my Discovery of India. The timing of the new logo and my discovery is purely coincidental!
Posted on Thursday, September 25, 2008 No comments: Links to this post 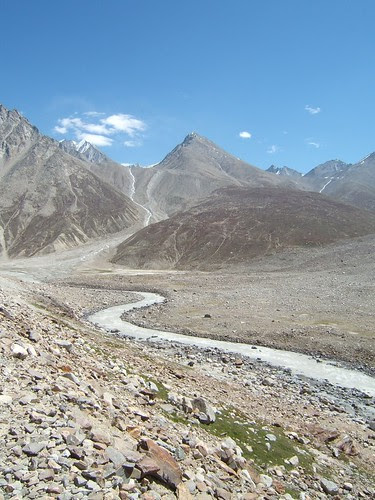 The thrill of exploring the unknown,
The adventure of going down a road that you dont know,
The mystery behind the tun that you are about to take,
The feeling when you meet new people and you try to come across as interesting,
The realization that you get once you know that you are yet another human being,

are simply too rewarding and too tempting to make you seek travel.
Posted on Wednesday, September 24, 2008 1 comment: Links to this post

Email ThisBlogThis!Share to TwitterShare to FacebookShare to Pinterest
Filed Under: Thoughts, Travel

Nokia WOMWorld sent me a Nokia E66 to review (read other reviews on E66 here) and after a lot of hick-ups and delays, here is the review. And with the advantage of hindsight, the review is all the more pertinent now since E66 been launched in India recently and lots of users would be looking for reviews on this handset.

Nokia E66 is yet one of those sliders from the E series family. The E-series is known for its ease of use and intuitive interface. E66 offers full multimedia and Internet experience with its wide display and high-resolution screen. It is a true office use phone with support for popular file formats like pdf, doc and xls etc.

Coming down to positives and negatives,

Ending Notes
In the end I would give this phone 3 on 5. Although it has lots of features and is probably the best slider available in India right now, the phone lacks a decent camera and is probably priced on the bit higher side. I would recommend it to someone who wants a powerful business phone and does not need a camera.

P.S.: Cant do a technical analysis. If someone wants to write about it, lemme know. Will update the post.
Posted on Tuesday, September 16, 2008 No comments: Links to this post

Email ThisBlogThis!Share to TwitterShare to FacebookShare to Pinterest
Filed Under: Nokia, Technology

Every year at around this time, I start fancying a new profession. Value Investing and Teaching. Culprit being Prof. Sanjay Bakshi. Who apart from managing Tactica Capital teaches a very popular course (titled BFBV - Behavioral Finance and Business Valuation) to second year PGPM participants at MDI.

In his own words, "BFBV is an excuse to teach worldly wisdom through multidisciplinary thinking...". Personally I have benefited immensely from my interactions with him. If I was to write my biography, I will describe a Saurabh Garg before he met Prof. Bakshi and another Saurabh Garg after he took BFBV. The course teaches you concepts and make you aware of ideas from vast variety of disciplines - Economics, Finance, Biology, History, Philosophy, Architecture, Religion, Mathematics etc. The course takes lessons from Illuminati like Benjamin Franklin, Charlie Munger, Warren Buffet (to name just a few)

He recently started the 2009 session of his value investing, behavioral finance and decision making course (course outline here). Please subscribe to Prof. Bakshi's blog here to get an update on his teaching material. Personally and professionally I will recommend it to anyone who wants to reinvent himself and believes that learning is a life long journey rather than an one time initiative. After taking a course you start looking at life in a different view all together.

I cant say that course made me wiser and more mature but I can say one thing for sure. It is an awesome experience and even if you are not looking at any long term rewards, the time you spent on that course is one of the most satisfying periods of your life. Do try it.

P.S.: Sandeep and I started PseudoSocial sometime back in 2006 to share whatever little we know and hoping to learn more and connect with more investors. The blog was a very rewarding experience till the time we were updating it. Time and work commitment does not permit us to update is very frequently. If someone wants to resurrect it, please let me know.
Posted on Tuesday, September 16, 2008 No comments: Links to this post

Bill Gates and Jerry Seinfeld in the new Microsoft commercial.

I simply love it. What do you guys think?
Posted on Saturday, September 13, 2008 No comments: Links to this post