Abruptly, randomly, for no apparent reason, while working, someone said Turn The Page.

Email ThisBlogThis!Share to TwitterShare to FacebookShare to Pinterest
Filed Under: Life, Metallica, Music

Where have you been?

Been some time since I last updated this blog. Last time I wrote, I wrote a rather longish post. So what all have I been upto? Not much actually but still, a blog is a blog and I have to write.
So I have been shuttling between Delhi and Haryana. I do like 100 kms daily and more than anything else, its taking a toll on my car. My dad's car actually. And this also means that I dont have time for sgElectra (web, twitter).
A friend, after lot of cajoling (read 4000 phone calls) finally ordered a copy of Way To Go for me. For the uninitiated, way to go is the latest book by Upamanyu Chaterjee (of the English, August fame). The sad part is that since I am reading The Nudist on the Late Shift (by Po Branson) and Complete Letters of Bhagat Singh, I cant start with way to go. But then I am totally enjoying the two books that I am reading and
I still hate Samsung Corby. Its the most idiotic phone ever. Please do NOT buy it, if you ask for my opinion. I have decided that I am not going to buy any phone but Nokia. For a smart phone, I might choose some other brand but a basic phone has to be a Nokia. Come what may.
Apart from this, a very good friend got hitched. To a namesake. Personal life started moving again but as I write this, I think its going to come a halt.
Anyways, to end this, I got this email from CitiBank that I never subscribed for. I sent them a email requesting removal from their mailing lists and they sent me this as a reply ... 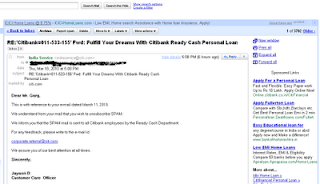 We understand from your mail that you wish to unsubscribe SPAM.

We inform you that the SPAM mail is sent to all Citibank employees by the Ready Cash Department.

Welcome to customer care :D
Posted on Thursday, March 18, 2010 No comments: Links to this post

Bade din sey crib nahin kiya. I feel odd. I can this negative energy affecting me. I need to blurt out. I want to write. I want to pour my heart out. On a public forum. I know every post I make goes on FB (atleast). I know most people dont give a fuck but there are a few who do take interest in what I have to say. And they are a large part of why I write. That one off comment, that random person writing in, it makes my day.

I know Miranda Warning (I have the right to remain silent. Anything I say, can or will be held against me in the court of law) holds truer for the Internet more than the real world. I know whatever I write today can be twisted enough in the future by some lawyer to seek higher alimony, or to make me plead guilty of a crime that I wouldn't commit. And I know I would be innocent. After all, as Red says, "everyone in shawshank is innocent".

So what ails Mr. Pandey? Few things that he is really touchy about. He wants to believe that he is a good writer. And his first paid writing gig is a complete mess. Someone paid him good money to write content for a website. Our Mr. Pandey put in real effort. Effort as in e to the f to the f to the o to the r to the t. And now, the client says it was a "very mediocre" job. Nothing pisses a man off more than a frivolous comment on the only talent he has got. Sigh the bloody difficult demanding unsupportive rude world.

Then he cant seem to make any headway with his love life. The last girl that he liked hates him for the bottom of her heart. But our Pandeyji remain hopeful. Hope, is a funny thing. Andy says "Remember Red, hope is a good thing, maybe the best of things, and no good thing ever dies". And Red says "Let me tell you something my friend. Hope is a dangerous thing. Hope can drive a man insane". Our Mr. Pandey, being a simpleton he is, cant decide which one to choose. And like all other fictional heroes, he doesn't have the luxury of the coin that has heads on both faces. Where to they make those coins anyways?

Next on is lack of greenbucks in his life. Once upon a time some random guy told him that he would never be rich. And he laughed on that random guy's face and asked him to wait and watch. And its been about 11 years since this face-off. And the random guy seems to be winning. And in all likelihood the random guy would go to his grave, grinning. Where is the money dude? How to people become millionaires and billionaires? And that too at such tender ages? Wait. Tender is politically incorrect. I meant young.

BTW as I am writing this for Mr. CSP, the world is celebrating the International Women's day. And the other half is busy watching the Oscars. I dont know which is more useless. I mean we have to award all the effort that goes behind making movies and we have to appease to all the feminists. What I dont understand is that how do all the women in the world settle with just one day? Take them to dilli haat and they cant decide what to buy and here they are, their entire existence summed up in one day. And they are actually happy with it.

Next on agenda is his idiotic habit of trying to do too many things at the same time. He clearly believes in sailing in multple boats. Its like playing twister, with each colored dot in a different boat. And since all the boats are independent and have different rowing mechanisms, he invariably falls. And the worse bit is that he refuses to learn from his mistakes. Reminds me of Sisyphus. Damn .. the damned rock is rolling down the hill again. Lemme go fetch it. I will be back guys.

And before I end it randomly, here a couple of links (from the same guy) - two of my favorite themes - Simpsons and Super Mario (bonus - flute + beatboxing and piano. More posted here).
Posted on Monday, March 08, 2010 1 comment: Links to this post