Started writing this a few days back. Finishing it today. Not changing the tenses. 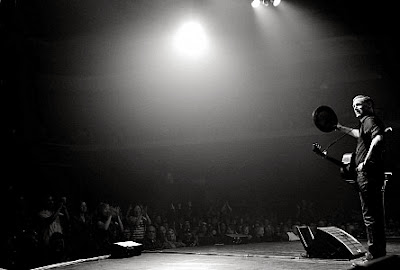 I have spent the last hour listening to various covers and live performances of the Summer of 69. Some by Bryan Adams himself. And some by other bands who are covering Adams' music. While I totally enjoyed all of those, something dawned on me. That I would never be an artist (or a performer) like that. I don’t even stand a chance. Not now, not tomorrow. Not in a thousand years. Even if stop doing everything and start learning guitar, I still wont have a chance.

Let me digress for a minute here. I define an artist as someone who creates original things - text, music, photographer etc and is not dependent on anyone else to create his output (unlike team sports and film). An artist works on his terms at his whims. And I define a performer as someone who has willfully taken up the task of entertaining an audience in exchange for a fee or a favour. Pretty technical huh? Coming back...

Its not about the guitar. Or about music. Or about the ability to sing. There is something else that these guys have, these artists I mean. These performers. They are not ordinary. Trust me they are not. Over the years, I have had the pleasure of seeing some of these performers up close and in person. As long as they are not on the stage, they are like you and me. They get hungry, they want Red Bull before they go up on stage, they seek attention, they want to sign autographs, they are greedy, they want to be paid by the minute etc. They are everything that you expect a successful human to be.

And then its time for them to go on the stage. The lights are dimmed. In the events parlance, we call it position. They take position. And then depending on the complexity of the setup and the show director, either a beam illuminates these guys or the entire stage comes alive with light. And then all of a sudden, like someone has flipped a switch, they transform from a regular human into a living thing larger than life. As large as God Himself if not more. And thing. Not being.

They know that every eye in the audience is upon them. Everyone is waiting for them to perform. Everyone has sky high expectations from them. Even if they are having an off day, they have to perform. And funny thing is, they do it. They deliver. Under all the pressure, they do it. They have this will to go out there and better themselves every time they are on the stage. And not just better themselves, they go beyond than that. They surprise people, make them happy, give them something to talk about when they go back.

Sigh! I can go on extolling their lives forever but then this post is not about them. Its about me. The sad old me. The sadder me after I saw all those videos of Bryan Adams' bestest song ever IMHO.

The obvious question that is begging for an answer is, do I want to be like him? Like them? An artist? I don’t know the answer right now.

The Love Part.
So till July this year, I was in the business of events management and I got to be a part of the entourage of multiple artists. And was in part responsible for assembling a show together. It was as close as I came to being a performer, except once upon a time when I was the MC for a game of housie. At work, even though I wasn't probably the best of employees and I did cut corners, I loved being there. There were a lot of things about being this nameless individual in a large entourage. Travel for starters. In India. And abroad. Then everything I did had a tangible output. That I could see. Often, larger than life. Unlike advertising and other places where my output was merely an input for others to work on, here my work was the damn output. It was often as large as a 60' wide stage. Once it was huge, about 44000 sq ft if I am not wrong. And it was awesome to see it come to life. And ofcourse the adrenaline rush that it gave me while the show was on. It was like putting a performance, except the artist catching all the eyeballs was someone else. I did not mind it really but I wish it happened with lot more frequency.

The Hate Part.
Coming to the hate part, since we were in the business of saving jobs (as a colleague once said) it meant that often, my life, my thoughts had no importance. There was no free will per se and it sucked. The entire point about being an artist is that you have an art that you know you are good at. And you know there are people who will happily pay money to see you perform. Patrons, if not random people. Thats what I am talking about. That is what was missing from work. Patrons.

The Sad Sad Part.
So here it the sad sad part. And the reason why I wrote this post.

I have these million lives that I want to live within this one life. And one of those lives is definitely a life of an artist. If not an artist, of a performer. And I know that however hard I may try, I will never be one. The closet I can be, is either be a nameless and faceless part of crowd that puts these shows together. Or haul their bags when they travel around the world. In either case, it would be a compromise.

Sigh! Lemme go kill myself about it.

In case you don't see a post tomorrow on this blog, you know what did the papers did not publish. Because I was not an artist. And I was not a performer either.
Posted on Tuesday, October 29, 2013

Some strive for it and some are born with the bubbling talent. Great to note you don't have a one-dimensional state of mind so for us, it's never too late to start the millionth life :)