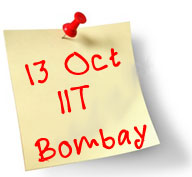 October 13 is now booked. Just signed up for Mumbai BarCamp2. Sign up at http://barcamp.org/BarCampMumbai2. Its being hosted at IIT Mumbai.

I am the 25th person to confirm my attendance for second version of BarCamp in Mumbai. My first ever. Lets see what comes out of it. I have heard from quite a few people that it can be real fun and in fact quite a few businesses have actually come out of it.

They also invite people to give talks. I would love to talk about a lot of things - especially not being able to start a company. Maybe someone can tell me how to start one. Beware Google. I am on the prowl.

Update 2: As on 20th September, Barcamp Mumbai 2 has 56 attendees and 3 speakers.

UPDATE 3: Dates for the barcamp changed. Its now on 14th October rather than 13th. 10 speakers and 83 attendees. Looks like we will have a blast !

Final Update: Back from the bacCamp. I think something is really really wrong about all the people trying to launch their companies. Most of the people are launching companies with no visible revenue streams. I dont understand how will these companies sustain themselves.

Email ThisBlogThis!Share to TwitterShare to FacebookShare to Pinterest
Filed Under: BarCamp, BarCampMumbai2

hey there..we are having a barcamp at techfest this time on 27th jan08
its wiki page is already up ..
i.e. www.barcamp.org/techfest
for more detaisl logon to www.techfest.org
plz mention bout this barcamp to make this one a grand one ..