Time for a Monday update. Apologies I couldn't make it last week. The week was very average with nothing special to write home about. Except that I took @sgElectra for a spin on Saturday. Forgot to take something warm and on the way back, nearly froze to death.

Apart from that, a friend (SV) gave me an idea for a series of short stories. Will work on it over March and will release it in April. For the ones who want a sneak preview, its about people, people watching, sociology, guesstimating fabricating, twitter and Internet. Keep watching this for more updates. Lemme know if you want to see some sample chapters as and when they happen.

With these stories, I will also unveil my writings section on SG.com. No, I am talking about any heavy duty material here. Just a place where I will gather all my fiction and nonfiction writings at. Idea is to create a repository of select writings and get feedback from people on them.

I also realized something about myself. At times, I get so excited by an idea that I get obsessed with it. And more often than not, those ideas are someone else's babies and hence I can't really work on them. Like this senior from MDI and his idea. Its a brilliant idea he is sitting on. I am not for a minute doubting his ability to execute it but he ought to have me on his team. More than working with him, I am keen on working on what he is trying to sell. I met him and pitched for my contribution. From look of things, he doesn't like me and I am not getting to work on it. You know I want it so bad that last night, I saw it in my dreams. Too bad. For me, for him and for the idea itself. But as with life, you win some, you lose some. Life moves on.

So I woke up early on Sunday. And since I had nothing to do, I decided to clean my drawers, shelves etc. At one point in time, I had this awesome habit of saving every bill, every receipt. From a ten bucks to whatever, I would not throw em. I would just dump them in a box. Ofcourse never to look at them again. This drawer that I cleaned had like hundred such receipts. Some dating back to early 2009. I tore all those and while doing that, they brought back tons of memories. Like this trip to Nainital with my parents. I knew what dates it was on, where all did we stop, what did we eat etc. Then there were lot of coffee shop bills. Quick research tells that I goto Barista more often than CCD. Then, when PJ was in Delhi, we had dinner at Pind Balluchi in CP. Then I found a slip with some phone number on the back. I don't know the name and I checked, I do not have that number stored with me. Then there were these petrol bills (and why did I ask for bills, god only knows), parking slips (I have parked my car at the most obscure places in Delhi), Gurgaon toll slips, bills for teeshirts that I bought (but never wore), shoes, even a laptop bag I bought in Dubai. I was serisouly amazed at the kind of things I have spent money on and all the obscure places I have been to.

And btw this is just one of the boxes that got cleaned. There is a bag full of receipts from the time I was in Mumbai. Cleaning, sorting them is another weekend project I think.

Anyways signing off. Too long a post to be written on a BB. Until next time!

Email ThisBlogThis!Share to TwitterShare to FacebookShare to Pinterest
Filed Under: Life, Mundane Updates

Lets talk in bullets.
Posted on Tuesday, February 22, 2011 No comments: Links to this post

Email ThisBlogThis!Share to TwitterShare to FacebookShare to Pinterest
Filed Under: Life 2.0, Personal

So I was idle in the afternoon. Took some help from one of the art guys around and here we have ... 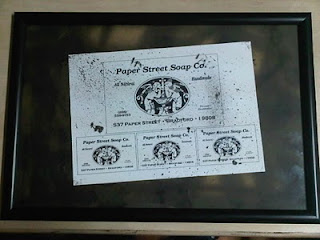 Orders anyone?
Posted on Wednesday, February 16, 2011 No comments: Links to this post

This day on, I will not have coke, diet coke, coke light, coke zero or any other form/brand/shape of coke.

sgMS please remind me next time I ask you out for a walk + coke. 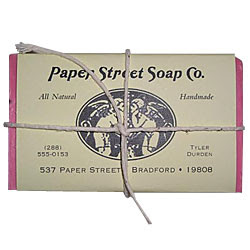 Coming Soon.
At a luxury store near you.
Posted on Monday, February 14, 2011 No comments: Links to this post

Moment I got up, I should have known that today was going to be a bad day. I missed my alarm. And why did I miss is? The damn phone was under me!
Then I got late, really late while getting ready. And since I was rushing for things, I dropped the watch – the one that I was gifted by MB23Oct. I would have dropped a hundred things a million times but they never break. And this time, the watch that I had never dropped before – broke!
And since I was getting late, I skipped breakfast. BTW did I mention that I am starting GM diet this week?
So far, having a really bad day at work. Fought with my team. Argued with clients. And am rude for no reason.
But then, the silver lining in the cloud – a song that I discovered while driving to work. The song is called Tu Na Jaane Aas Paas Hai Khuda. From this movie – Anjaana Anjaani. Its available for download here. Its so brilliant, its better than trance. Wish there was more such music.
Posted on Friday, February 11, 2011 1 comment: Links to this post

Email ThisBlogThis!Share to TwitterShare to FacebookShare to Pinterest
Filed Under: Music, Rant

Email ThisBlogThis!Share to TwitterShare to FacebookShare to Pinterest
Filed Under: Lyrics, Music

3M: Of Shoes, Books and Travel

Starting this week, I shall try and post something or the other every Monday. I shall call it Monday Morning Musings. Or 3M in short. Why would I do this? I dont know. I just want to. When would I stop doing this? I dont know.
Anyways, so this week I shall talk about places and things where I spend most of my money on.
To start with, I spend waste invest heavily in shoes. The paradox is that I hate to wear shoes but then I love to buy shoes. I have about 12 pairs right now and I think in terms of brands, I have more Puma than Nike than Converse that Reebok than Adidas. And yes most of these are sports shoes. I do have a pair for those odd occasions when I am made to wear formal trousers. So attached here is the latest addition to my collection! And believe it or not, I bought these from Patiala. 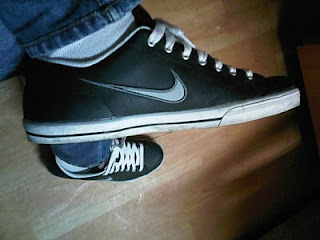 Then, once am done with all shoes, I buy books. I buy books about anything and everything. And more often than not, I use flipkart.com's wonderful COD. If I ever wanted a job, I would want to work for flipkart. Their execution of things is impeccable. If Amazon.com ever thinks about entering India, they should start by acquiring flpkart.com. Jeff, are you listening?

And then after all the shoes (that I buy and do not wear) and books (that I buy and do not read), if I am left with money, I buy air tickets. Between Delhi and Mumbai. I have that frequently that the counter girl at GoAir now knows me my face and moment I show up, she volunteers to give me my favorite seat on an aircraft - second last row, aisle seat.

Wondering what are three things that you buy most with your money? Anyone?
Anyways, until the next 3M, adieu!
Posted on Monday, February 07, 2011 1 comment: Links to this post

This is one of those posts that are totally meaningless and totally irrelevant. You write these things purely for the love of seeing your fingers do the little dance on the keyboard. And the funny thing is that you dont even know where the words flow from.

So one whole month of the year has gone past. On the first of January, at AS's place, I had told myself that I would make this year the defining year of my life. I decided that moment I was back in India, I would sit down and make a list of things that I would do and achieve this year. And before I realize, its Feb. And February 4 at that. Things have been ok to say the least. Some very sad on personal front. Some exciting. Somethings are looking up. And some are exciting. The whole spectrum. I really wish I could talk about those things here.

Come to think of it, why cant i? After all the combined readership of this blog is two as of last count. One is me. And other one is PD29Jun. At least I would want to believe that PD29Jun does read this. She never leaves any indication of having read this though. Anyways, coming back, I think I can make things personal here. Lemme take a call in the next few days.

And right now I am binging onto awesome guitars and violins on this cover of 18 till I die. Clichéd it may sound but I really want to be 18 till I die. I need to do a longish post on it and justify that I really really mean to be 18!

P.S.: The post was called "The little dance on the keyboard" before I wrote about 18 bit. Now its called what its called.
Posted on Friday, February 04, 2011 2 comments: Links to this post

Email ThisBlogThis!Share to TwitterShare to FacebookShare to Pinterest
Filed Under: Fiction, Rant, Writing

Can someone give me a credit card?

So even since I realized that I need to own a credit card, I have been banging on doors of all card companies and literally begging for a credit card. I call the companies myself and tell them to get me a card. I walk into bank branches and fill application forms. I even used my airline frequent flier programme to apply for a card. And its been more than a month now.

Since I have worked with GE Money in the past, I understand that I don’t meet the credit policy guidelines. Those days the risk policy said, if you are above 25 and living with your parents, you are ineligible for a credit card. Irrespective of the amount of money you make or the background you may have. And they checked for two things only – Intent and ability to pay back. I have all the intent. I am not sure of the ability though.

Is there a banker that can trust his guts and my promise and issue me one? I promise not to default on the card.
Posted on Friday, February 04, 2011 2 comments: Links to this post