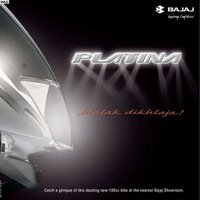 Jhalak Dikhlaja, a song from Himmesh Reshammaiya - I admit his music is good, but he can certainly stop singing - has been used in product launch for a new bike by Bajaj Auto.

Bajaj Platina launch has used Jhalak Dikhlaja for the campaign. Created by LOWE, this campaign can be viewed online here. MagIndia has a couple of print ads and the TVC.

Coming on to the much awaited review (my review :)), I think the product (Bajaj Platina) sucks. The "jhalak" part would fade away in a couple of months and the selling point of the bike - the shiny new looks would be gone. Further, there are lots of options for people when it comes to buying bikes. Coming on to the song, I think the song sucks big time (more than the BIKE). The lyrics are bad. The word aaja repeats throughout the song for eternity. Coming on to the Singer, the singer sings through the nose and all his songs sound the same. I am sure if you heard a piece of song, you wont be able to tell which song is that.

But ... yes BUT when the two (and product and worse song) are combined together in that ad by a genuis (the copyrighter, creative director and other people for the Bajaj Platina project at LOWE), the ad becomes a piece of art. Amazing picturization and direction. I think I have some kind of liking for the Black n White species.
Posted on Sunday, June 04, 2006

Email ThisBlogThis!Share to TwitterShare to FacebookShare to Pinterest
Filed Under: Advertisements

I thought I'd have to write a long comment explainin why I thought you were as demented as the ad when u'd told me about it ...
But frankly u've taken care of most of it. Infact I think if we view the last paragraph as more of a sarcastic comment then it'd reflect my thought completely !!